Vegan marshmallows should be part of any plant-based kitchen – for s’mores, hot cocoa, or just for snacking.

Any plant-based kitchen should have a staple like this vegan marshmallow recipe in their back pocket. 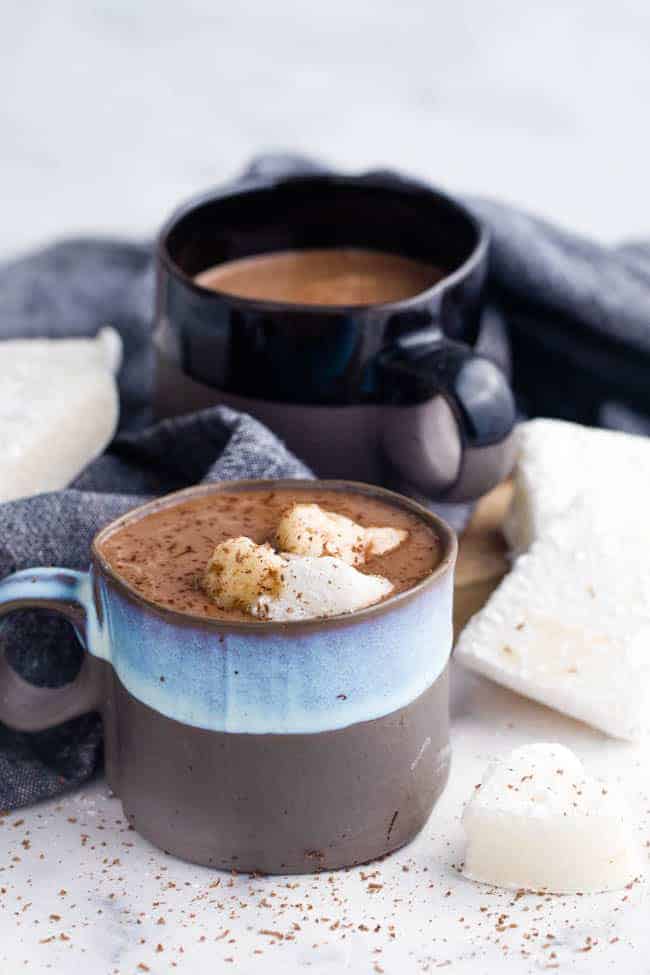 Vegan marshmallows homemade in my own kitchen. I have to say, I never thought I’d see the day.

You see, marshmallows and I have a long history. I’m not gonna lie. They’re kind of a gross food. In the sense that it’s a sugar overload. Like way too much.

Despite their overly sweetness, I can’t tell you how many times I’ve hidden a stash of mini marshmallows in my desk drawer and just munched on them while working on something. I mean, who does that? Granted, it only takes like 2 little handfuls before I have a full-on bellyache and my mouth is coated in an artificial powdery substance.

Yet I still keep doing it to myself over and over.

In fact, marshmallows are one of the few foods I have held onto since going vegan. And I know I could go pick up a bag of store bought vegan marshmallows, but that means going to a store that’s out of my way and also paying quite a bit more than a couple bucks for the mini marshmallows I’m used to. So I just haven’t made the transition. 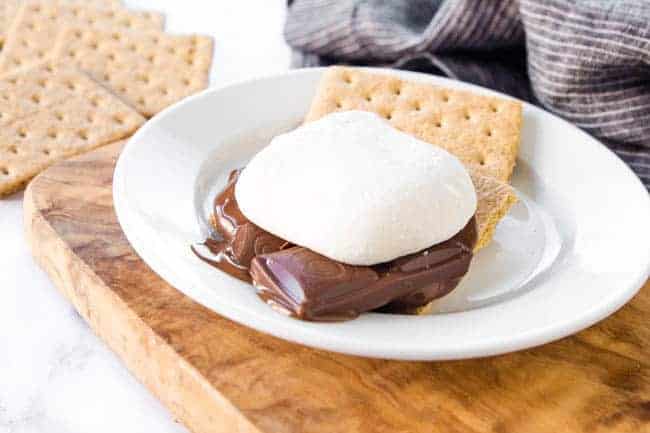 But first let’s talk about marshmallows.

What brands of Marshmallows are Vegan?

I know Trader Jos has started offering a gelatin-free marshmallow. Dandies is another popular brand as well. But I know both of these options can be difficult for those who don’t live in larger cities and have a TJs in their area.

Unfortunately, not even a little bit. The gelatin in them makes them not vegan at all… so let’s talk about that.

Why is gelatin not Vegan?

Most conventional store-bought marshmallows contain gelatin. And I know what you’re thinking. Gelatin is no problem. There’s no meat in my Jell-o. I totally get it. I didn’t realize this until my brother-in-law told me and ruined all jello, gummy bears, and fruit snacks for me. Thanks dude.

But yeah, back to gelatin. So it’s pretty gross when you think about it. Gelatin comes from pork… specifically the tendons, skin, bones, cartilage… you know – all the extra part you really don’t want to think about. And most of us don’t. But man, if you’re wanting to rid yourself of animal products, gelatin seems like a great place to start, cause blegh. I want nothing to do with a little piggie’s cartilage or other extra parts. And I definitely don’t need that in order to give my gelatin-free marshmallows and other treats that squishy texture we love so much. 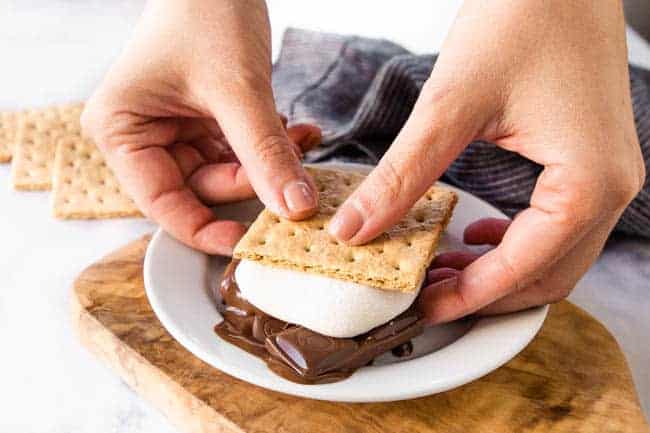 So then what do we use instead?

Agar powder. Or agar agar. It’s a weird one. I know.

And I don’t like using products that are off the wall to you, but sometimes you just gotta place an order on Amazon and make it happen. I had a hard time finding it local, even at the specialty health stores, but I heard that it’s readily available at most Asian markets.

What exactly is agar powder and why do you need it in this vegan marshmallow recipe?

Agar actually comes from seaweed! But don’t worry – there’s no fishy flavor going on here. No flavor. No smell. No color. In fact it is very similar to gelatin in most aspects except for where it comes from.

It does differ in the fact that agar sets more firmly than gelatin (which may be a good thing if you’re trying to keep something firm and gelatin-like on a warm day). I mean, you don’t want your vegan.marshmallows to melt all over the place until you have them on a stick over the fire, right??

I’ve tried just whipping up aquafaba and using a sweetened foam-like mixture for marshmallows, like in my vegan s’mores dessert and my s’mores meringues, but it’s just not the same. Without the use of agar powder, you’re not getting the stability and jiggliness you’re looking for in a marshmallow.

I’m already looking forward to all the different ways I could use agar powder. Think vegan gummy bears. Vegan panna cotta. Vegan custard… a creme brulee maybe? Oh man, I’m getting excited already. What do you think I should use agar for?

So to sum it up on these amazing completely plant-based vegan marshmallows: 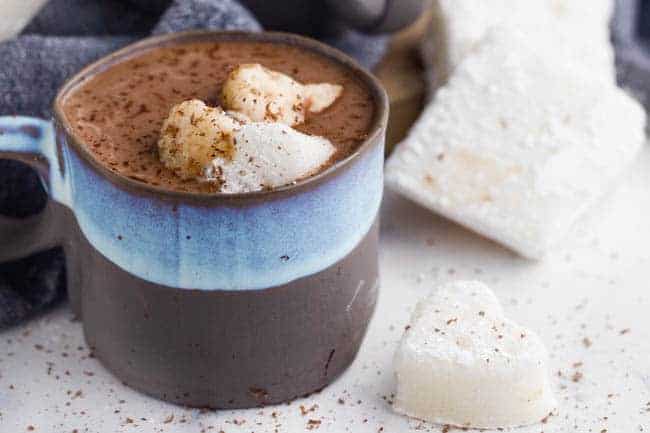 And I know you’re wondering the most important thing about these homemade vegan marshmallows.

Because this so matters… they taste just like a toasty marshmallow you’re used to from your childhood. I couldn’t believe how similar the flavor was.

In fact, I didn’t even get that nasty belly-aching sugar-coating situation with these marshmallows! Total win! 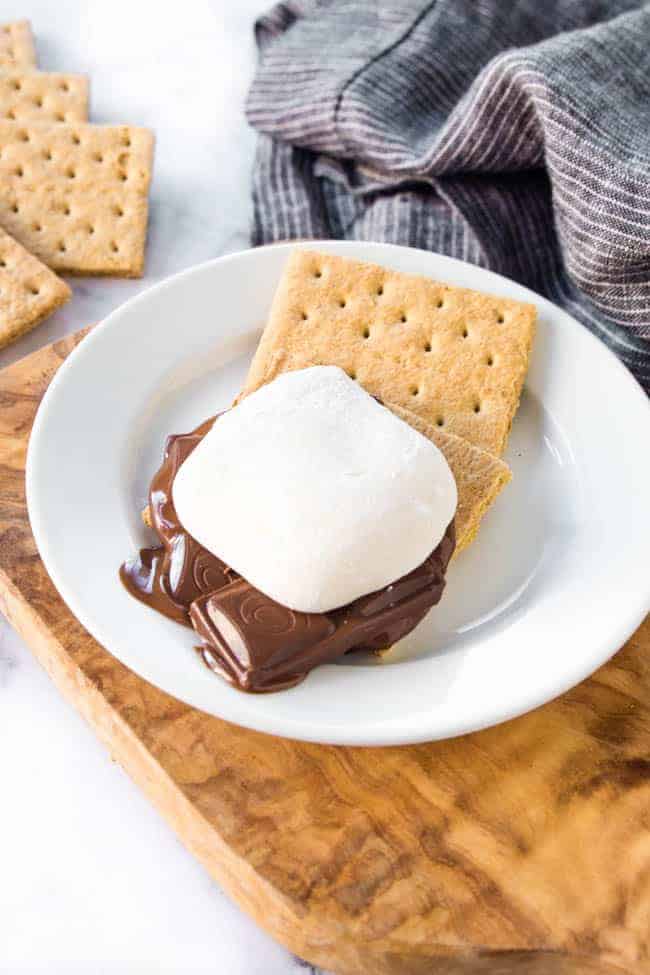 You can bet your bottom dollar that every mug of hot cocoa and every s’more will be complete with the addition of these vegan marshmallows.

What are you waiting for?!

One of my very favorite ways to enjoy marshmallows is sandwiched between two cookies, and the chocolatey the better. I’d definitely smash a mallow between these triple chocolate cookies without a second thought!

Or woah – what if you stepped it up a notch and put a marshmallow on my favorite vegan brownies?! WINNING!

NOW THAT YOU KNOW HOW TO MAKE VEGAN MARSHMALLOWS, IT’S TIME TO SNAP A PIC AND LOAD IT ONTO INSTAGRAM (TAGGING ME OF COURSE @HAPPYFOODHOLLY) SO I CAN SHARE YOUR CREATION!

Grease bottom and sides of an 8x8 pan. In a small bowl, combine powdered sugar and cornstarch. Use a few spoonfuls of the mixture to coat the pan on all sides and corners. Set the pan aside and save the remainder of the mixture until your marshmallows are completely set and ready to cut.

In a 4 quart heavy-bottomed saucepan, pour in 3/4 cup water. On top of the water, pour the granulated sugar, corn syrup, agar agar powder and a pinch of salt. Give 1-2 very quick stirs. No need to completely combine by stirring.

Bring to a rapid boil until the mixture has reached a temperature of 214-220 degrees F. This takes at least 15 minutes for me, but you definitely want to keep a watchful eye. Once the sugar mixture has come to temperature, remove from heat.

Turn your stand mixer, fitted with the whisk attachment, on to low and cover with a towel to prevent any of the boiling hot sugar to splatter on you, causing burns. Carefully and slowly pour hot syrup down the side of the bowl while the mixer is on low. Then gradually increase the speed until you're finally comfortable with it on high, as soon as possible. Just keep it covered with the towel to prevent splatters.

Whip the mixture for 10 minutes until thick - almost like a shiny soft-serve ice cream consistency, creating ribbons as you pull the whisk up.

Immediately transfer the whipped mixture to the prepared 8x8 pan and set out for 12-18 hours, uncovered. You want the tops to be completely dried out and not gooey at all. Once they are dried and feeling solid, you can cut them into desired shapes (see notes for cutting techniques)

Once you have cut a marshmallow, toss it in the powdered sugar + cornstarch mixture so it's coated in all sides. This will prevent it from becoming a sticky mess.

At this point, you can s'more it, roast it, or drop it in your hot cocoa.

Keep in an air-tight container for up to a week. If you must stack them, be sure they're coated with powdered sugar mixture and separate layers with parchment paper.

To prevent sugar crystals from forming in the boiling pot, keep a small bowl of water nearby, and use a pastry brush to carefully brush water around the inside of the sauce pan, creating condensation.

As an Amazon Associate and member of other affiliate programs, I earn from qualifying purchases.

Please note that I am not a medical or nutritional professional. I am simply recounting and sharing my own experiences on this blog. Nothing I express here should be taken as medical advice and you should consult with your doctor before starting any diet or exercise program. I provide nutritional information for my recipes simply as a courtesy to my readers. I expressly disclaim any and all liability of any kind with respect to any act or omission wholly or in part in reliance on anything contained in this website.

Don’t like the sugary version? I also have a vegan marshmallow recipe that I’ve made with some success that using aquafaba as the main ingredient. It does work, but is slightly less stable. I’ll include that recipe here for those who want to give it a try as a “healthier” vegan marshmallow option. 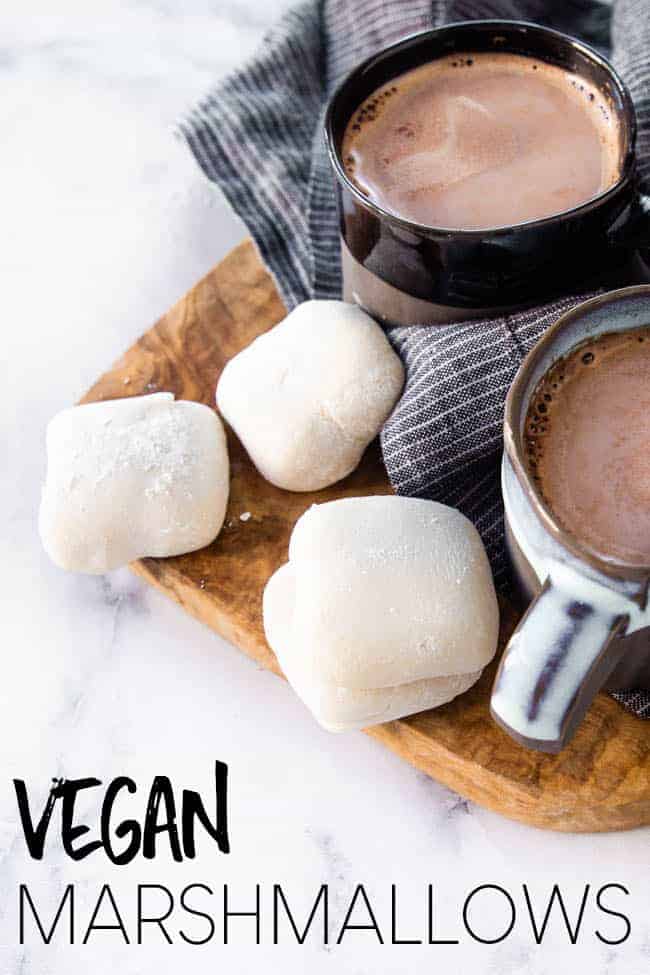 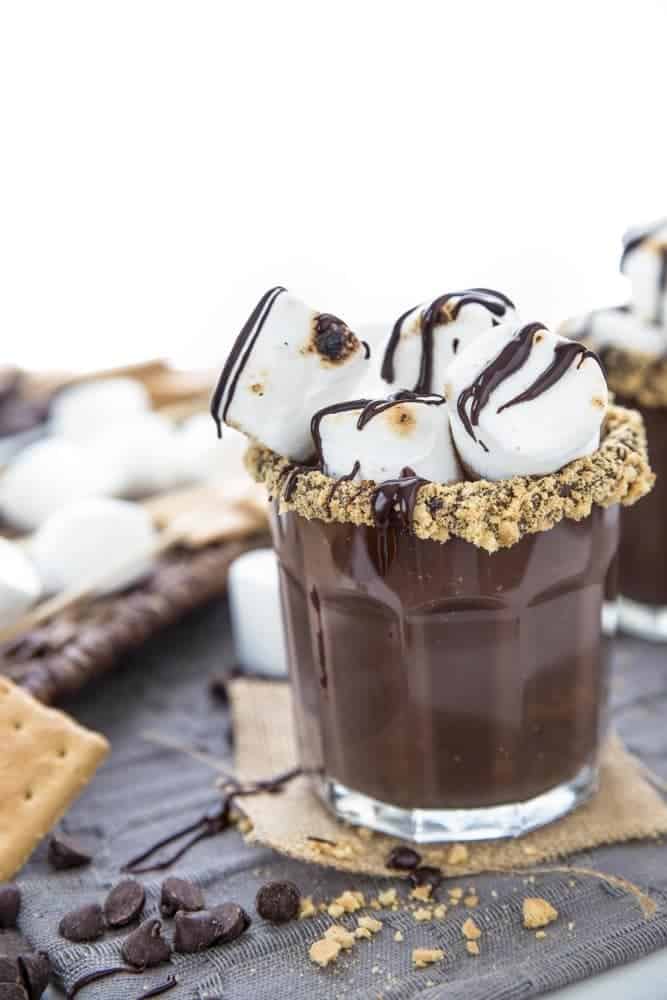 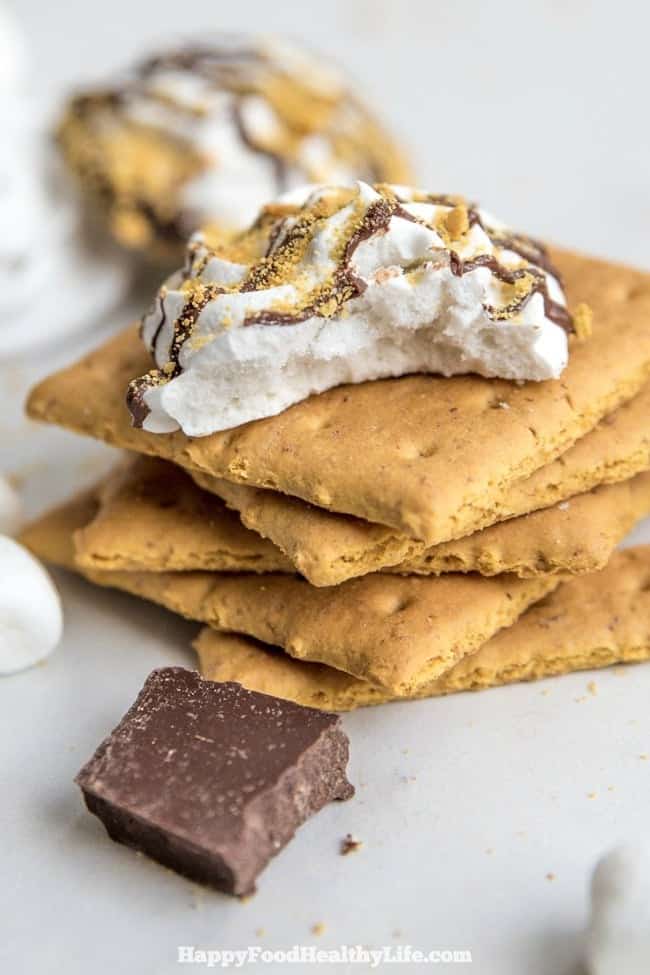 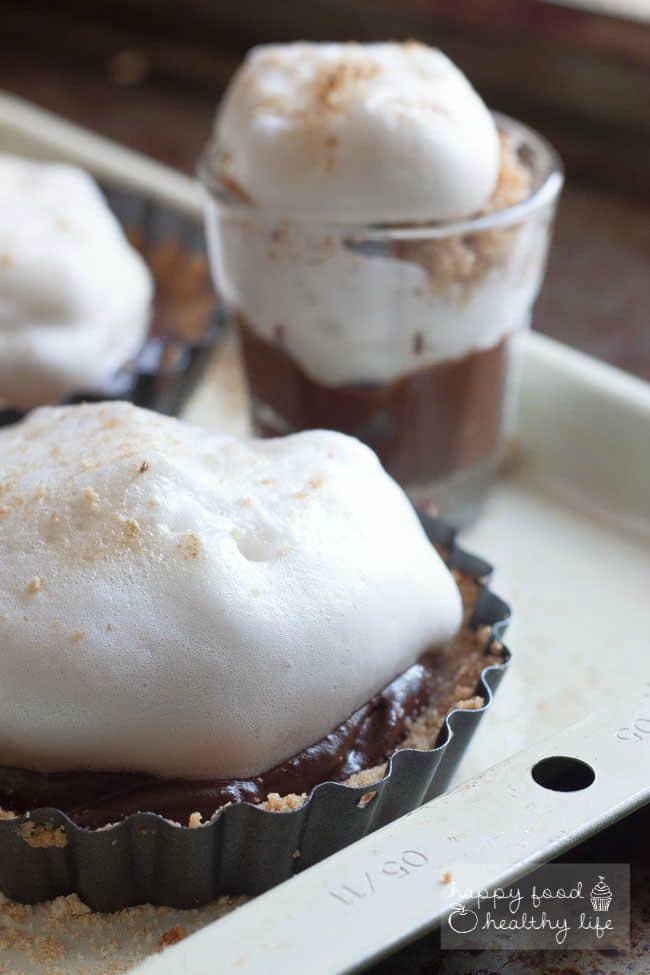 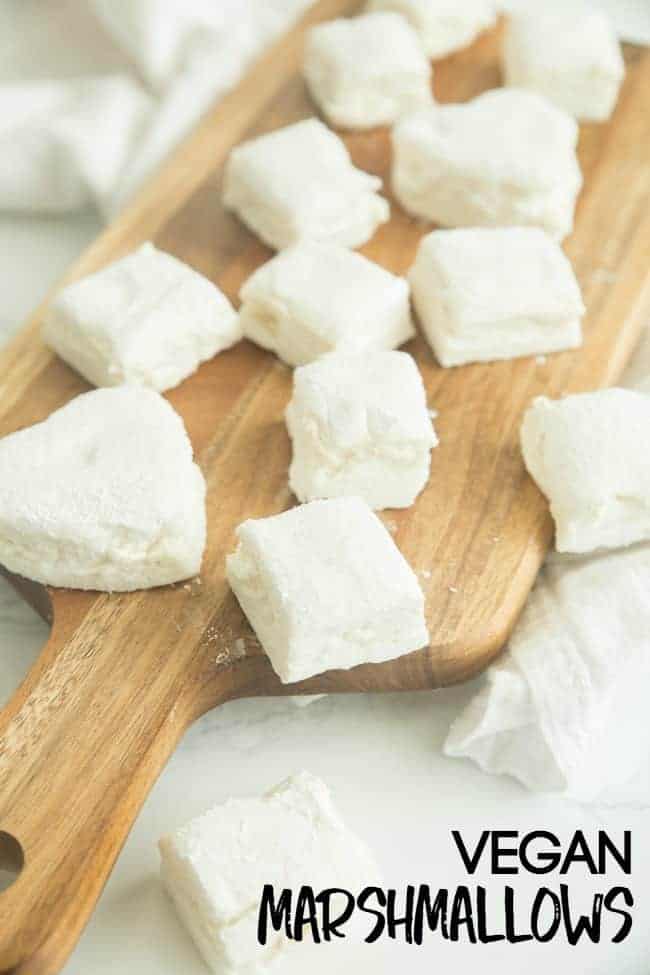 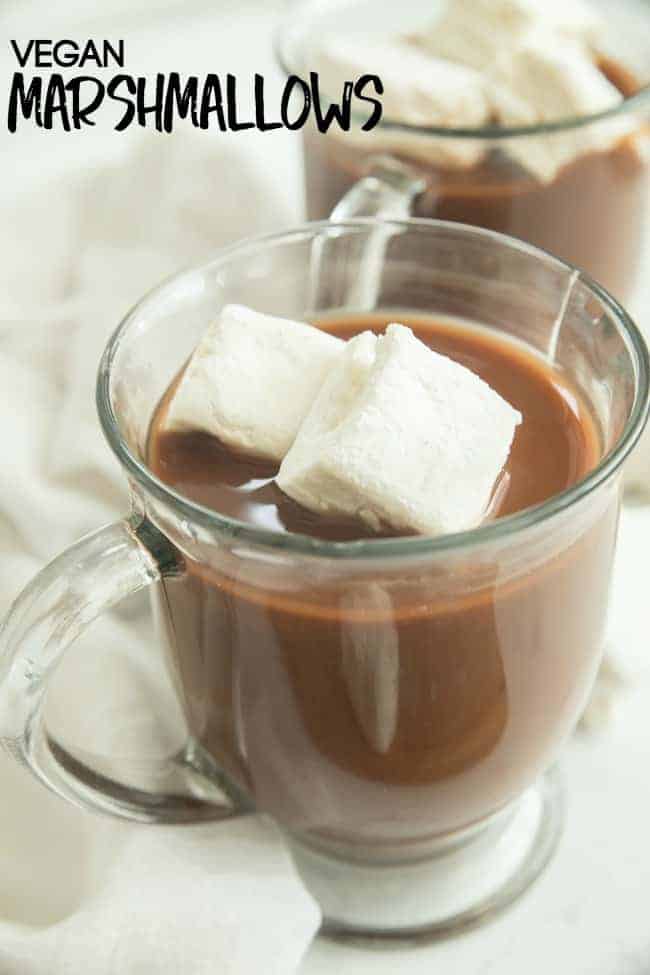 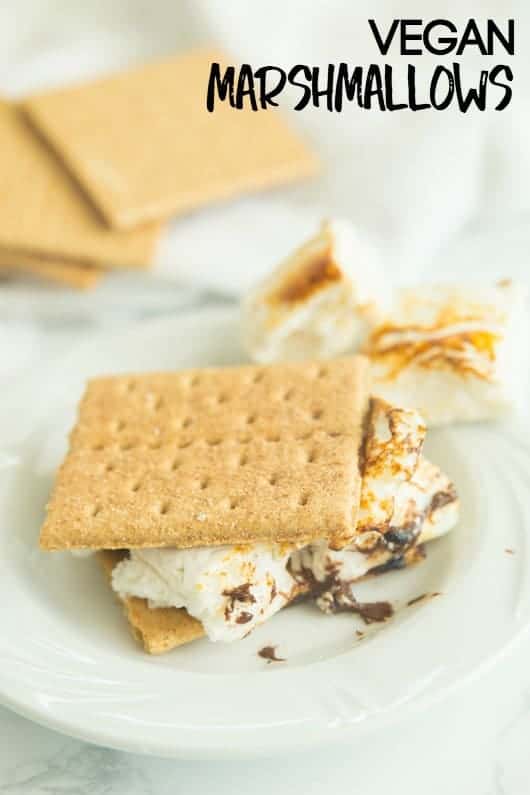