This is the best vegan waffle recipe to make on the weekends or for holiday brunch and comes together with just a few simple pantry ingredients you probably already have on hand.

Having a vegan waffle recipe on hand for weekend breakfast is definitely a staple you don't want to miss!

This recipe has the perfect balance of fluffiness on the inside with a slight crisp on the outside, making it the ideal waffle for loading up with berries, nuts, whipped topping, and lots of pure maple syrup.

The excited look on your crew's face when you tell them you're making waffles for breakfast will be priceless, and they never have to know it's a healthy vegan waffle. Believe me - the flavor definitely will not give it away!

Waffles are pretty much the same as pancakes, but they're like an upgraded version. They're like pancakes but with more features.

Think about it. Pancakes don't have little compartments to hold all your things.

Pancakes don't have perforated lines showing you exactly where to cut if you want to divide them in half or even in fourths.

Waffles are the literal upgrade to pancakes, and I am here for it!

So what goes into the best vegan waffle to make it so perfect?

Almond milk - The first sub we're making to a traditional waffle recipe is to use a non-dairy milk. I like using unsweetened almond milk, but you can sub in soy or oat milk here instead. Or even a vanilla almond milk for more flavor.

Apple Cider Vinegar - Mixing this to the almond milk is going to add an acidity, resulting in something very similar to buttermilk. This is what helps create a fluffy waffle once it reacts with the baking powder. You could also sub lemon juice here instead.

Ground Flax Seed - My favorite sub for eggs is to make a flax egg, combining ground flax with water and letting it sit for 5-10 minutes until it's good and goopy. Make sure you're using ground flax, not the whole seeds. Chia seeds could work here as well, as they also create a goopy texture once soaked in water.

All Purpose Flour - You could also use whole wheat pastry flour here. Or if you need to make this gluten free, many people have had success with Bob's Red Mill 1-to-1 baking flour.

Coconut Oil - Melted coconut oil is usually my oil of choice for baking. If you'd like to make this oil free, you can sub in applesauce, but you won't get as much of an outer crisp.

These ingredients are so simple to put together, you barely need to be awake to make the magic happen. Get the coffee poured, and start sipping, and you'll be ready to serve these up in no time.

Step 1 - In a small bowl, combine the almond milk and apple cider vinegar and set aside for 5 minutes.

Step 2 - In a separate small bowl, combine flax seed with water to form a "flax egg." Set aside for 5 minutes until gooey and gelatinous.

This Vegan Waffle Recipe is everything you've ever needed when it comes to comfort food:

You really want to be sure you're mixing just until you can't see any dry ingredients left. Over mixing would cause too much gluten to form, resulting in a tough and chewy waffle, and no one wants that!

This may sound like a no-brainer, but you want to be sure the waffle iron is on and preheated before pouring the batter in. Also be sure to give it a quick spray even if it has a non-stick surface. I can't tell you how many times I've had to scrape waffles out of my waffle maker because I forgot to spray it. The oil spray will also help with the crispiness.

How to Know When they're Done

This one is so important. I'm telling you - do not trust the indicator on your waffle maker. It doesn't know. It is only a machine, and you are smarter than that.

What you want to do is make sure no more steam is coming from the waffle maker. At that point, you will know that all the moisture has been cooked out and your waffle is ready to carefully remove.

Two tips for your ingredients. 1 - sift the flour to ensure light and fluffiness. 2 - make sure your wet ingredients are room temperature. The water, the milk, applesauce if you're subbing that in for oil. If they are cold, your coconut oil is going to solidify, and that's just calling for a mess of clumped oil and probably a failed recipe.

Want your vegan waffles to keep their crisp factor? Don't stack them! I know - they look so pretty stacked up high like in my pictures, but I'm telling you - do as I say, not as I do.

Stacking your warm waffles will create condensation and moisture between each other and all that nice crisp will be gone in no time.

I think the best way to keep your waffles warm while maintaining the crisp is to place them on a large baking sheet in a single layer in a 200° oven while you're finishing up the rest of the waffles.

I love this recipe for meal prep because of how easy they are to freeze. Wait for them to completely cool, then place them in a freezer bag and freeze for up to 3 months!

When you're ready to eat them, just pop them out and throw 'em in the toaster to crisp up.

If you're looking to just store the leftovers, place completely cooled waffles in an air-tight container in the fridge for up to 5 days. They will not stay crisp, but that's nothing a toaster can't solve!

Breakfast food is the best because of how customizable they are.

If you'd like to go nuts, feel free to add additional ingredients into your batter:

And the possibilities are endless for topping these bad boys:

What brand of waffles are vegan? Are Eggo Waffles vegan?

There are a few brands of frozen waffles that are vegan. Trader Joe's has one. Nature's Path has quite a few flavor varieties. Kashi and Van's are also vegan options. But no, Eggo waffles contain egg - hence the name - and milk in most of their frozen waffle varieties.

Can I make these plant based waffles oil free?

Yes! If you'd like to omit the oil, feel free to add unsweetened applesauce instead. They just may not be as crispy as you'd like.

Why do my waffles split in half when I open the waffle maker?

This is happening because your batter isn't cooked all the way through. Do not trust the indicator light on your waffle maker. Watch the steam coming out of the waffle maker. Once it stops steaming, that's how you know they're ready, and they shouldn't split in half at that point.

Now that you know how to easy it is to make this vegan waffle recipe, please give it a star rating below and comment letting me know how it turned out for you. 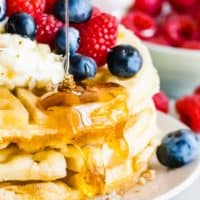