Think flowers are only for looking beautiful? Think again. The lavender in this blueberry lavender smoothie bowl pairs so well that you'd never think you were eating something floral-y. You're going to want to add this to your smoothie rotation this summer for sure! 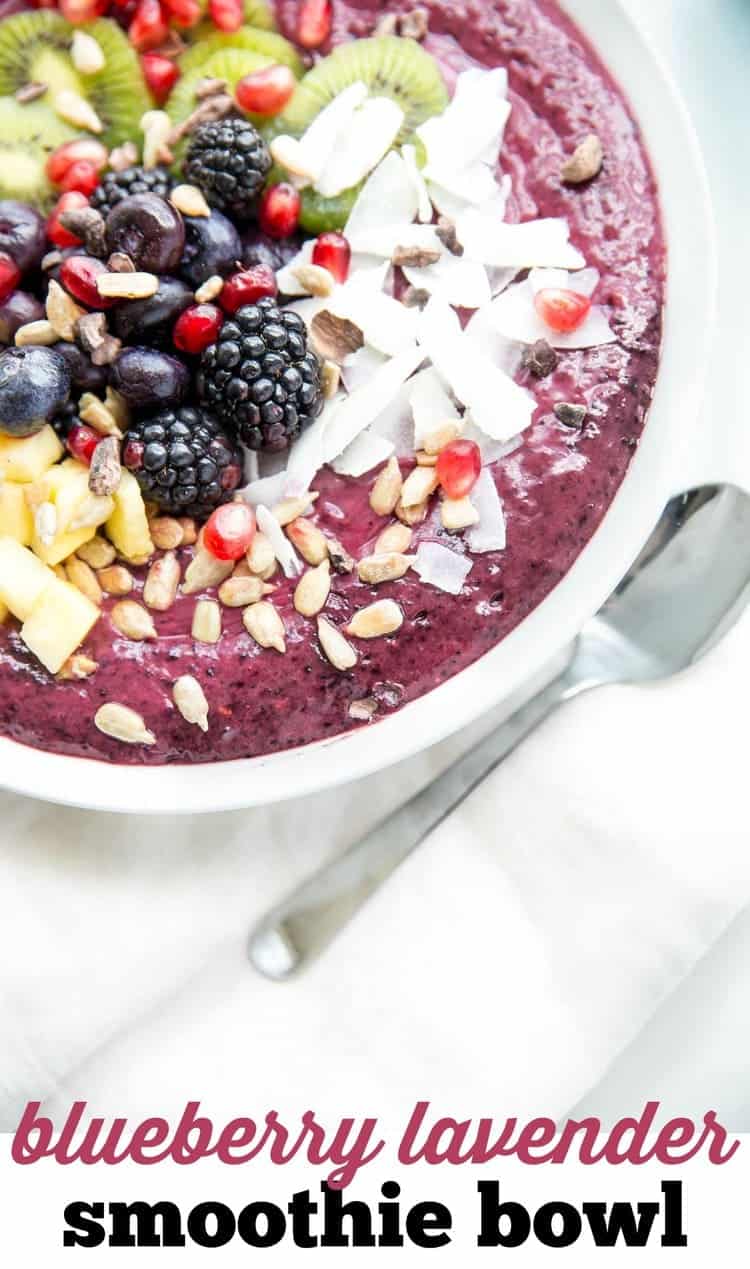 Do you ever play out an event in your head and assume that you know exactly how it's going to go? I mean, we all do this, right? You have expectations of how your days are going to go. Or you have an idea of how an event will play out.

Yet it doesn't always go as planned, does it?

For example. I have been a working-outside-of-the-home mom for the last 6 years until last July when I made the switch to work for myself from home full time. My son has never really gotten a summer vacation like all the other kids because he always had to get up early to get to summer day camp while I went to work. I always felt bad that he wouldn't get the full summer vacation experience that I got as a kid.

So going into summer break, I had all these plans as my first summer as a work-at-home-mom.

Yesterday was day one. All I can say is YIKES. I am definitely nervous for how the rest of the summer will go.

I had plans of waking up early and getting a few hours of work done before the kiddo got up. Then I'd make breakfast, and work for another hour or so while he relaxed. After that, we'd do some sort of fun activity together, and he'd be so appreciative and grateful to have me home with him during the day. I wouldn't stress about work that wasn't getting done. I'd feel gratitude for getting to play with my son during the summer.

Because he would be so appreciative of my time home, he would have zero qualms with the summer rules regarding chores, screentime, and quality reading time. He would quietly play on his own in the afternoons after our morning together so I could get some work done.

That is how it went in my head. 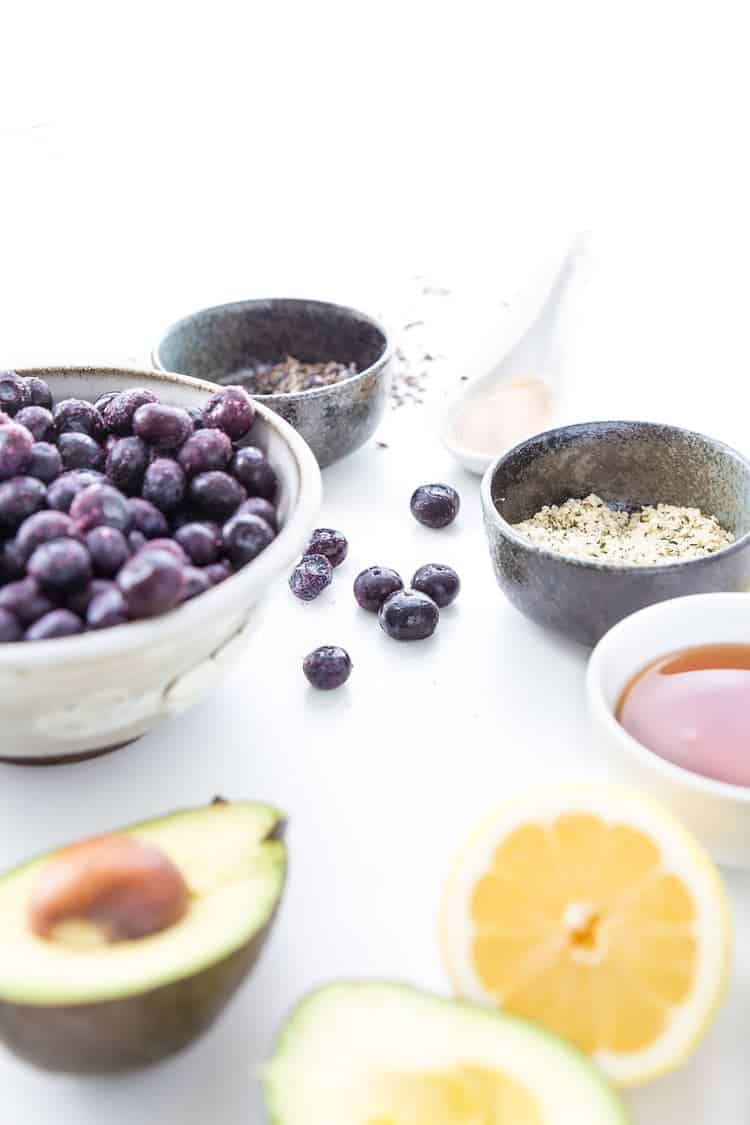 The reality of the matter is that I need to let go of any and all expectations I have regarding working and summer.

First thing's first. I woke up early but the house was about 80 degrees and I could barely think straight because of the heat. So the thought of getting any work done was absolute nonsense. I kind of just sat there feeling miserable.

(PS, anyone know how to win the battle over the A/C with a frugal spouse??)

Secondly, once the kiddo got up and I introduced the screentime rules, the meltdown began. For the record, they were very reasonable rules. Like no more than 90 minutes of screentime at once, then you move on to something else, whether it be chores, reading, creativity, exercise, outside play, etc. Only when I determine that enough time and activity has passed can a screen turn on again. That apparently was blasphemy.

And then to kick off the summer, I decided to take the kiddo to the library to sign up for the summer reading challenge, which we do every year. To make it even more fun, we went to the super cool and fancy library downtown that we never go to because it's not as close as the others. I thought I'd win mom of the year award with that one. (We're library nerds... it doesn't take much.) Well, the library was cool and all, but it was only fun while it lasted.

By the time we got to the store and I wouldn't allow treats to be eaten before lunch, the fun was forgotten and I was no longer a hero. Instead, I was given the stink eye from the back seat of the car all the way home and all while I was making lunch. Really? Is this how it's going to go? Oh, and how dare I make you eat at the table with me away from the G.D. tv screen!

So that was that. Halfway through day one of summer break, and I was already feeling the heat, both figuratively and literally. I was spending way too much time arguing and reasoning and not enough time trying to enjoy his company. 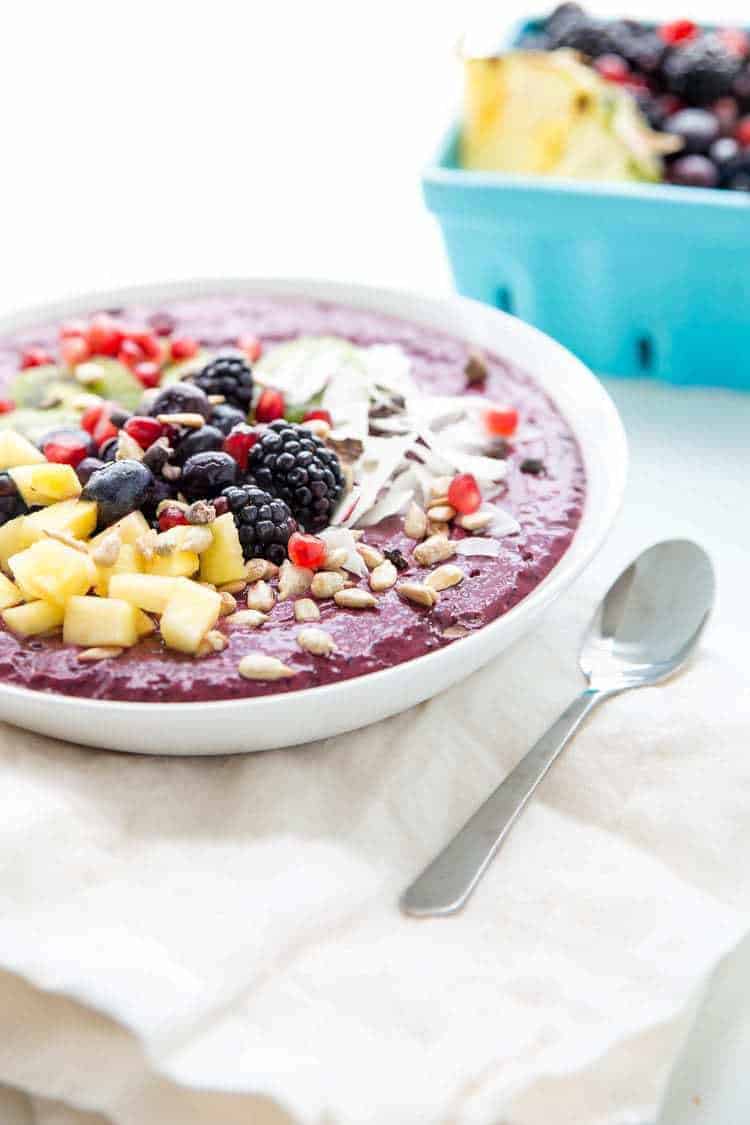 Finally, at 3:00 in the afternoon, once he had earned his screen time back, I was able to sit back at my desk to edit these gorgeous smoothie bowl pictures. Thank goodness they were ridiculously photogenic because I was in no mood to spend much time on them.

Oh! And let me tell you - as soon as those 90 minutes of screen time were up, he was back up in my office bored out of his mind. There was no quiet play. There was no independence. Without the screen, I'm not sure he knows what to do.

Those 15 books from the library he was excited about 5 hours earlier meant nothing. The puzzle he got out to start was way too lame. The idea he had to write a story meant absolutely nothing to him. Getting outside was out of the question cause 93 degrees is just too dang hot (I'll give him that)!

Is this going to be the new norm of my summer? Not starting work until mid-afternoon? Having to argue day after day with an almost-tween who just wants to be connected to a screen? 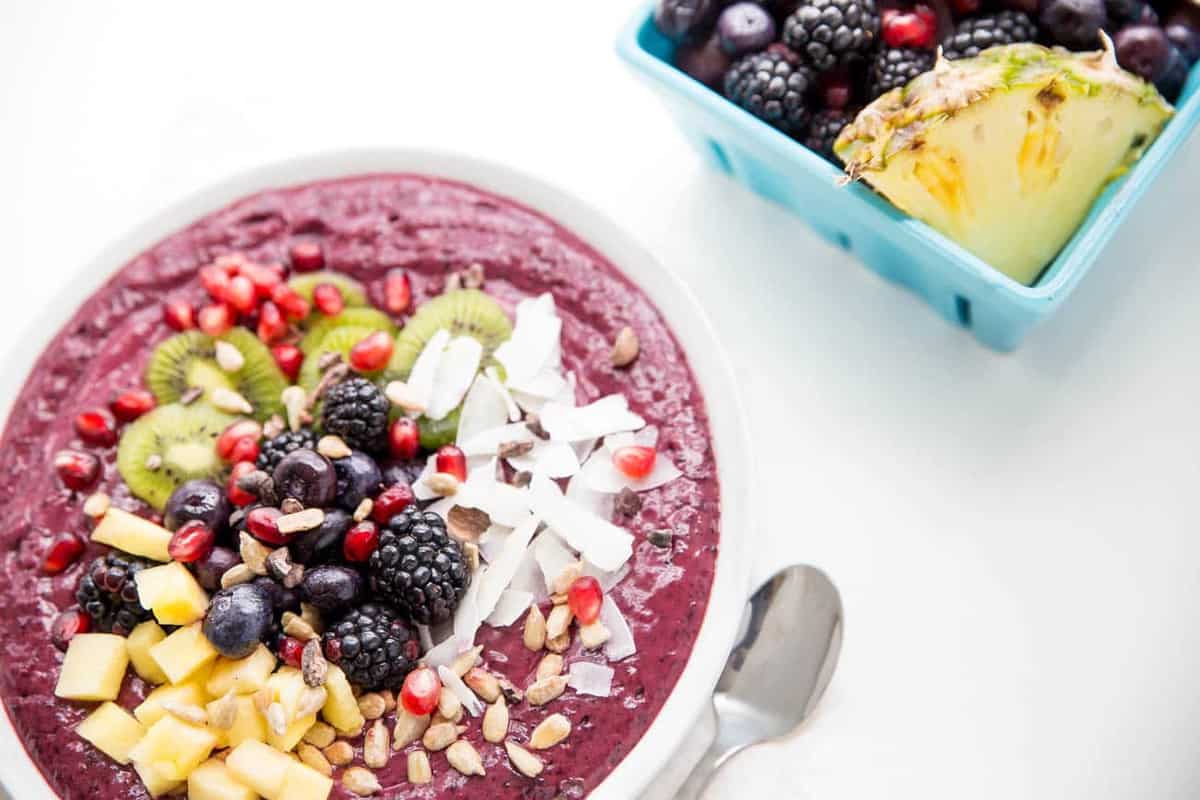 The joys that my kid is really only this cute age once (yes, there were quite a few cute moments throughout the day).

These are the things that I'll remind myself when I ask why the hell I chose to be a work-at-home-mom.

And in the meantime, I'm taking my smoothie bowl and hiding in a closet. There is no other way this summer. This is all.

[Tweet "Pile your smoothie bowl high with this unexpected flavor combo this summer."] 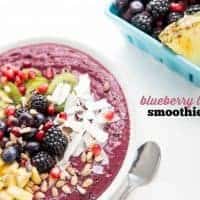 Makes 2 smoothie bowls Though lavender essential oils are considered “general safe for consumption” by the FDA, I do recommend doing a background check to ensure the company that you’re purchasing from offers a certified pure oil. If you’d rather not use lavender oil, feel free to omit. Or make your own lavender syrup by boiling raw honey with lavender buds for 3-5 minutes, then straining out the buds before using.
Tried this Recipe? Tag me Today!Mention @HappyFoodHolly or tag #HappyFoodHealthyLife!
« Spiced Chickpea Kale Salad with Lemon Cashew Dressing
What if I Never Feel Full? »