These HEALTHY MINI PECAN PIE BITES are the perfect way to indulge in your favorite holiday treats without feeling guilty.

But when a client sent a whole pecan pie to our office last holiday season, I couldn't help but give it a shot. I mean, c'mon, I can't call myself a foodie and not actually know what pecan pie tastes like.

My thoughts on it?

I mean, don't get me wrong... it was delicious and had so much flavor, but I couldn't eat more than one bite without feeling like my teeth were going to rot out of my head.

Ever since then, I have wanted to replicate that pie into something healthier, less rich, and of course miniature. Because who doesn't like mini food?! (you know, so you can have 2!)

My wife actually has a completely different experience with pecan pie that I have to share. She also hadn't had pecan pie her entire life until about a year and a half ago. Just not something either of us grew up with.

So she was in basic training for the Air Force from January to March 2014, and during that time was not allowed any sweets at all. Nothing. It was all healthy food to fuel their long grueling days of training. Just one of the many sacrifices she has made to serve our country. Seven months away from home in order to train and learn her job. Our communication was reduced to hand-written letters in the mail. Along with the desserts, she wasn't allowed any coffee for those three months. She slept in uncomfortable beds. She had to keep night watch multiple times, which meant very little sleep for her. She had to march day in and day out.

And now that basic training and the initial schooling is over, there are always certifications she is working on. On top of her demanding day job, she often stays up late just to study for her next test. Her commitment to the Air Force is just so admirable, and I'm so proud to call her my wife.

There is a point to this story, I promise.

So in the last week of basic training, they were finally given allowance to sweets. Most people went absolutely crazy at the shopette on base. Lots and lots of junk that ultimately made them sick. Tiff on the other hand, picked up a piece of pecan pie from the cafeteria and said it was the best thing she had tasted in such a long time.

She will always remember that memory of pecan pie, and that is why I wanted to make her these cute little healthy bite-sized pies. Both to gear up for the holidays and to celebrate her achievements in the Air Force this week as we celebrate Veteran's Day.

If you liked the video, make sure you head on over to YouTube really quick and give it a like and subscribe so you don’t miss out on any more videos –> here’s the link where you can do all that. 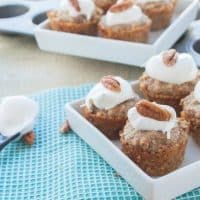