Imagine a spoonful of creamy pudding that's also certifiably Vegan. Vegan Banana Pudding is a guilt-free indulgence you can enjoy in 1 hour or less!

How many times have you passed up banana pudding because you couldn't find a Vegan option? This Vegan Banana Pudding is the real deal! It is creamy, dreamy, banana-y, and most importantly it tastes just like the pudding you grew up eating.

Just one bite of this Vegan Banana Pudding and you will be hooked! The combination of ripe bananas, creamy pudding, and fluffy whipped topping is simply irresistible. And if you are looking for a little bit of crunch, feel free to add some chopped nuts or granola on top. It's time to stop dreaming about this vegan dessert option and start making it.

Bananas - One of the main ingredients in Vegan Banana Pudding is pretty obviously bananas!

Whipped Cream -  Using whipped cream in this Vegan Banana Pudding is a good idea! There are many store bought options, but you can also whip coconut milk with a splash of maple syrup for a homemade option.

Vegan vanilla wafer cookies - These are my favorite and a great Vegan option.

Turmeric powder - This is optional for color and it doesn’t affect the flavor at all with the small amount we’re using in this recipe.

Unsweetened plain almond milk -  I like to use almond milk, but you could use any dairy-free milk.

Full-fat canned coconut milk -  Using coconut milk alongside almond milk makes for a super rich and creamy pudding. Be sure to use the full fat canned version rather than the cartoned milk and scoop out the solids to use for this recipe.

Cornstarch -  This is what helps thicken the pudding. If you’d rather not use cornstarch, you can use tapioca flour (aka tapioca starch).

You will also need granulated sugar and sea salt for this recipe.

Full ingredient amounts and in-depth details are at the bottom of the post on a printable recipe card.

Step 1 Combine the sugar, cornstarch, sea salt, and milk in a large saucepan. Whisk well then turn the heat to medium-high and bring to a simmer.

Step 2 Simmer, stirring frequently, until the mixture thickens, about 2-3 minutes. Remove from heat and stir in the vanilla. Let cool completely.

Step 3 To assemble, layer the cookies, pudding, sliced bananas, and whipped cream in individual jars or a baking dish. Refrigerate for one hour or until ready to serve.

If you're looking for a delicious vegan banana pudding recipe, here are a few pro tips to get you started.

Use any bananas you have

Try other types of milk

Try Other Types of Milk

Don't be afraid to experiment with other types of milk. Almond milk is what is called for, but you can also use unsweetened soy milk, rice milk, oat milk, or cashew milk.

Don't Be Afraid of Spices

Consider adding some spices to your pudding. A pinch of cinnamon or nutmeg can take it to the next level.

Give the Pudding Time to Set

Give your pudding plenty of time to set. Vegan pudding can sometimes be a bit thinner than its non-vegan counterpart, so give it at least an hour in the fridge before serving.

With these simple tips, you'll be on your way to making delicious vegan banana pudding that everyone will love!

What is banana pudding?


Banana pudding is a dessert made with layers of vanilla wafers, bananas, and custard or pudding. It can also include whipped cream, nuts, and a variety of other ingredients.

What are some vegan pudding recipes?


Some vegan pudding recipes include chocolate pudding, vanilla pudding, and banana pudding. These recipes typically use plant-based milk, tofu, and other vegan ingredients.

Are there any vegan pudding recipes that do not use soy?


In fact, this one doesn't include soy. Other options are plant based milks and even avocados as a base for soy-free vegan pudding.

Now that you know how to easy it is to make this Vegan Banana Pudding, please give it a 🌟🌟🌟🌟🌟 rating below and comment letting me know how it turned out for you. 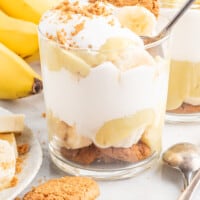