Earlier this week, I spoke about the signs and symptoms of someone battling an eating disorder. I mentioned how dangerous and life-threatening some of them can be to a person. I talked about how someone who is showing the signs of an eating disorder needs to get help as soon as possible in order to turn their lives around.

As I was writing through those risks, I had a thought. What makes me the expert? What makes me think I can tell people to go get help if they’re struggling. As an eating disordered person, I knew all the signs and symptoms. I knew the harm I was putting my body through, yet I had no desire to get help. And now in hindsight, I can see that there was nothing anyone could have said in an attempt to scare me. It was something I had to do for myself. 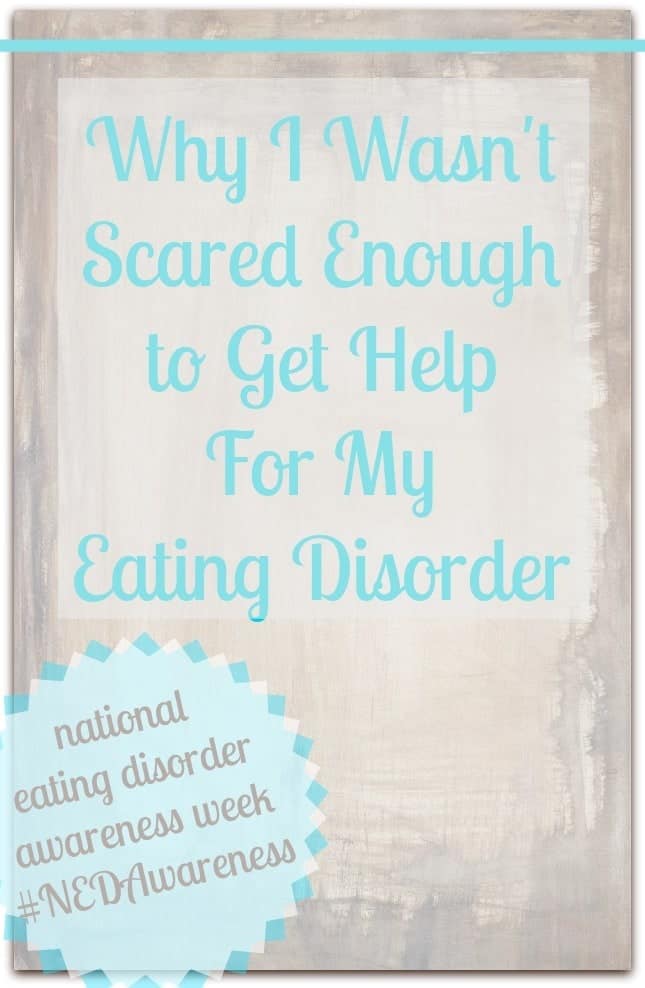 Very early on in my teenage years, I did an internet search on the signs and the symptoms on an eating disorder to see if I had maybe had one. Some of the signs were there, but I told myself, “Ah, I’m not that sick… it’s not like I’m even that skinny! And I really only skip a few meals here and there. Nothing major.” So there’s that, I was in denial. And it only got worse from there.

Over the years, I continued to get more and more sick and lose more and more weight. There were even a few times I would purposely look up all the complications and risks of having an eating disorder with the intentions of scaring myself. The problem is that it didn’t work. I was probably the most informed person about eating disorders on the planet. I knew I was slowly dying inside. I knew that my body was in complete survival mode most of the time. I knew that if I didn’t seek help soon, I would end up in a hospital. Or worse – not even make it that far.

So why didn’t the scare tactics work on me?

As an eating disordered person, there was a comfort in my eating disorder. It was one thing I could turn to that I knew would always be there for me. It was the one way I could control my life when it was feeling, otherwise, very out of control. So why would I want to give up that feeling of safety and comfort for a life of what felt like chaos. I know it sounds strange to say that my eating disorder was a comfort to me, but it truly was. From the time I was 13 until the age of 26, anytime something started to get a little bit crazy and out of control, I just started restricting my food in order to feel a sense of control. The days that I went without eating were usually the days that I felt high as a kite and on top of this world. Nothing could bring me down on those days.

Being that I was always back and forth between anorexia and over-eating disorder, I was never at a very low weight. Because of this fact, I didn’t think anything serious would happen to me. I just kept telling myself that as long as I was still able to make it through each day without ending up in a hospital somewhere, I was okay.

And then there’s the eating disordered voice. The one that tells your logical and smart voice to shut up. Your logical voice is screaming at you telling you that you just need to eat or you are going to die. It’s begging you to eat more than a bagel and coffee for the day. It’s asking you to please take care of yourself so that you don’t die.

If Scare Tactics Don’t Work, What Do I Do?…

Maybe you know someone who is struggling with an eating disorder. Maybe you’ve tried and tried to get it through their head that they are hurting themselves. I just want to tell you that most likely your loved one already knows the harm they are doing to themselves. Getting angry and telling them about how much they are killing themselves isn’t going to do the trick.

Calm and compassionate words are the way into your friend’s head and heart. Words that aren’t controlling, threatening, or accusing. Words that don’t make your loved one feel worse about themselves. Words that won’t make them want to push away from you.

So before you accuse eating disordered people of being selfish and ignorant, take a second and think about what they may be going through. Understand that this is a true mental disorder that plays serious mind games with those who are struggling. It’s not as easy as, “you just have to eat or you’re going to die.”  That’s not enough. Many eating disorder sufferers don’t even have the self-worth to care if that is the case.

“The desire to get help has to come from within the disordered person.” {click to Tweet} Something has to hit them hard enough to make them want a change.