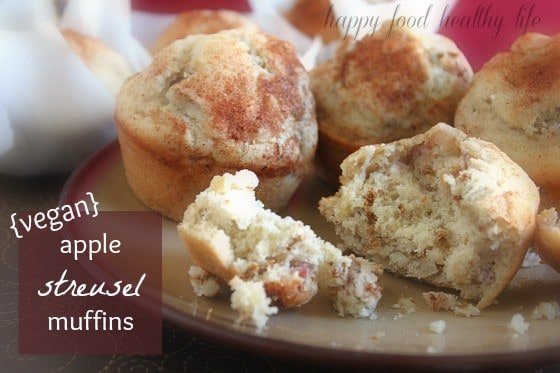 In our house, many (as in two out of three) of us don’t have time for breakfast. My morning scenario is one of two things. Either I’m up at 4am to get out the door to hit the gym and have no desire to eat anything before hand, and then I’m right to the office afterwards. Or I end up waking up at the last possible minute before having to throw on some clothes and makeup and attempt to make something of my hair. There is definitely no time for breakfast in this scenario either.

And my honey? Well yeah, she just sleeps as late as possible. Again, no time for breakfast.

Solution to all this no-breakfast-eating madness? Muffins! Great to just grab and go. Good for breakfast with some fruit. Good for a mid-morning snack. Good for in the car. Good for walking to the bus. Seriously just good for any time.

And these aren’t just any old muffins. These are vegan muffins. And on top of that, they are some of the best muffins I’ve ever had in my life. They’re full of super healthy and cinnamon-y sweet apples. They’re a perfect combination of firmness on the edges and moist fluffiness in the center. And of course, the fact that you substitute the eggs out for bananas just makes this recipe so much healthier. Less fat and cholesterol all around. Yet, you’re not sacrificing the flavor at all.

So where did these muffins come from? About nine or ten years ago, as I was making the change from a meat-eating life to a vegan life (which only lasted about 6 months, and then I toned it down a bit to just vegetarian), I happened upon this cute cookbook full of a ton of personality and charm. This was before I got into all the blogging that was just taking off and way before Pinterest came to town, and I was in need of some inspiration. There are so many great vegan recipes all throughout “The Garden of Vegan“. Pies, Cakes, and even Ice Creams that are all vegan, and absolutely delicious. These amazing ooey-gooey cinnamon rolls happened to originate from this cookbook as well. There are also a bunch of green-living hippie-like recipes for household items such as cleaners, body scrubs, and this Peppermint Foot Massage Oil that I’m really interested in trying out.

Basically, my point is this: If you like fun recipes from a couple of tattoo-d and vintage-y retro chicks, you have got to check out this cook book. They also have two other books titled “How it all Vegan” and “La Dolce Vegan” (which is geared more toward the vegan who doesn’t have the time to be vegan and just wants to whip things together) that I just had to grab as soon as I learned about them. I was not disappointed in the slightest bit.

I hope you don’t let the big V word scare you off from trying these muffins. They don’t taste like something healthy. Your tastebuds will 100% thank you! And your belly will be happy you didn’t run out the door without breakfast again! 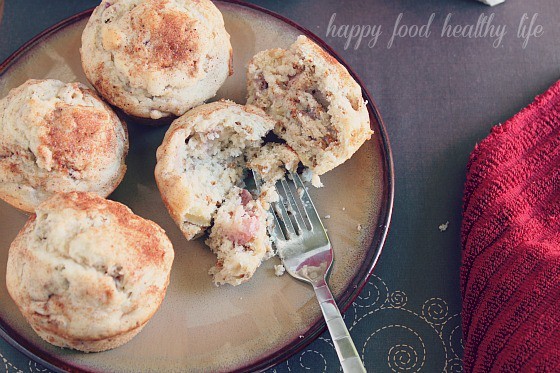 In a small blow, stir together the 1/4 cup sugar, 2 teaspoons cinnamon, and nutmeg. Set aside.

what is your favorite grab-and-go breakfast or snack?