I know it has only been a week since we’ve talked about the previous step of being mindful, but I’m thinking that’s probably enough time for you to work your way through some of the steps. I asked you to be more mindful of each moment, in hopes that you would focus on the things that are important without any outside distractions. For me, I have a hard time eating lunch at work without being distracted by the computer, so that is something I need to work on a little more.

This week, I want to talk to you about step four. Nonjudgment.

How often do you go about your day labeling foods, either aloud or in your head? Do you ever say things like, “I can’t eat that doughnut! That’s bad food! I can only eat good foods like fruits, vegetables, and plain chicken breasts.” Somewhere along the lines, it was ingrained in our minds that some foods are good and some foods are bad. It is time that we end that judgment on foods. There is no such thing as a bad food! It took me a long time (almost an entire lifetime) to figure that one out.

It all started when I was around ten years old and was forced to lock up all the bad foods I wanted to eat so that my mom didn’t have access to them. She didn’t have the self-control to be around “bad” foods but wanted wanted to allow her kids the ability to eat those foods. Thinking she was doing no harm by allowing us what we wanted and by not restricting our foods, she was actually teaching her children that some (most) foods are bad and some foods are good. What is your relationship with foods in this sense? Is it set in your mind that some foods are bad and that if you eat them you are being bad? Or if someone asks you if you want a slice of cake, for example, you say something to the likes of, “no, I’m trying to be good today.”

Let’s end all this good and bad food talk. There is no reason to criticize every bite. As you stop judging, you allow yourself to be more present and aware of what you are doing. You are able to really decide if you actually like a certain food or if you have just ingrained a predetermined idea of that food in your head. And when you stop judging yourself and the foods that you sincerely want to eat, you will stop punishing yourself. You won’t have a reason to call yourself fat. You won’t have a reason to feel out of control. You won’t have to make excuses to yourself anymore. 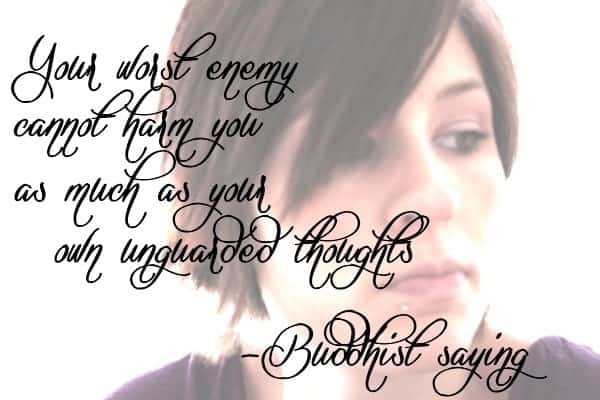 It’s not as though you can magically make these judgments go away. It’s going to take you awhile to come to terms that a slice of that cake isn’t going to mean that you completely blew your day. But I’m asking you to step back to the very beginning of this mindful process and be aware of your judgments. Be aware of them without necessarily believing the judgmental and self-criticizing thoughts. Even though people often try to use guilt and name calling to try to motivate some sort of change, it is the non-judgmental behaviors that are going to help you to move forward in this journey of becoming mindful.

Do you look at foods with “good” and “bad” labels on them?

To help you visualize this step, I have put together a short video exercise to help you out.

If you’ve missed the first 3 steps of the Being Mindful series, don’t you worry. I have got you covered!

* Or if this is just too much for you and you just want to make a cake, by all means, go make a cake!