Do you have specific foods that you can call “trigger” foods?

You know the ones I’m talking about. They’re like a bad ex-boyfriend. The ones you can’t trust to be left alone in the same room with. The ones that even just one taste of will make you crazy and have you devouring unhealthy amounts. The ones you know you are supposed to keep your distance from but just can’t resist the urge to test the waters.

So what are they? What are the foods you are just a little bit (or a lot) leery toward? Foods you know that you didn’t buy to just eat one serving of. You know full well that you won’t stop there with these foods. You will stand at your kitchen counter eating and eating these foods until somehow you snap out of it and realize what you’re doing. Once you have started this type of relationship with a specific food, it’s really difficult for you to have a “normal” or healthy relationship with these foods again.  This food is a binge food, and it is likely that it always will be. So it’s important that you identify which foods play this role in your life.

Packaged cookie dough (that I have no intention of actually baking)

Alright, so the hard part is done. You identified the foods that you know are triggering for you. For me, I know that if I was to buy a package of cookie dough (especially oatmeal chocolate chip), I wouldn’t use it to actually bake cookies. I would eat at least half of the tube in one sitting until I got sick. Same with the other foods on my list. I am fairly certain that these foods would get demolished in one sitting.

Why is it important to know this information.

Why put that temptation right in our faces when we’re just trying to make peace with food? There’s no point in even going there yet. Sure, one day, maybe I will be able to keep those foods around without any temptation of eating them in their entirety. Just as it may eventually be easier to be around an ex-boyfriend years down the road, where as now it may just be a recipe for disaster.

As soon as you know which foods are your trigger foods, let’s get them out of your life. You don’t have room for them right now.

From my experience when I’ve tried to bring some of these foods back into my life, it has ended in disaster. I tell myself I am in control. I say I’m only going to allow myself a certain amount of this food. I possibly even put the remainder back in the cupboard or the fridge, thinking I’m fine and everything will be ok. I sit down. I eat the small amount I said I was going to, and I’m feeling great and in control. But as I tasted that food again, something in me just snapped. I couldn’t stop thinking about what was left of it in the pantry. I keep trying to focus on other things, but my mind just goes back to it. And then I snap… I need more of that food, and my body just won’t be satisfied until I get it. We have trained our minds to react this way to certain foods.

It is because of this that I have made it a point to identify my trigger foods in order to avoid a situation like this. It is not worth it. I don’t believe in the need to eliminating foods in order to lose weight. But this isn’t a weight loss issue. This is a health issue. It is not healthy for me to be around these foods.

One day, it may be completely different. But for today, I do still have an eating disorder. I may be recovered, but I could relapse at any moment, and I am going to avoid that at any and all costs. I’d like you to join me in your fight against yet another relapse! 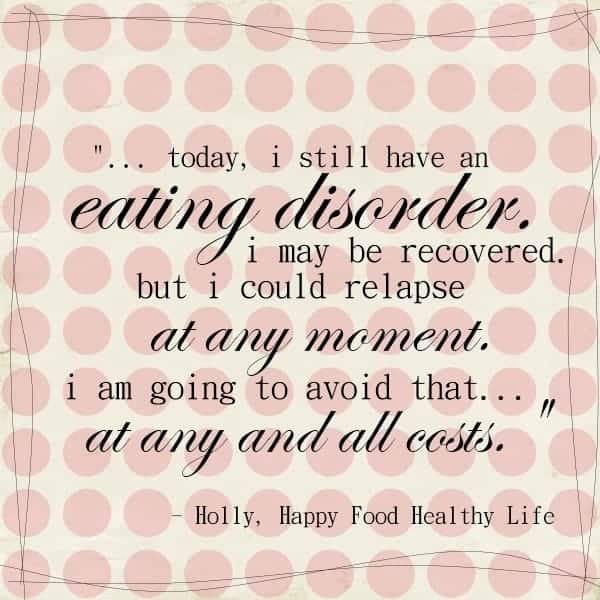