As I mentioned yesterday, this week is National Eating Disorder Awareness Week, and I focused on the fact that everybody does know somebody who has struggled with an eating disorder at some point in their lives. The number of people in the US who are struggling with an eating disorder is a staggering 30 million! I know that some of this information is what you would call “blah.” Far from Birthday Cake Cocktails and Blueberries &  Cream Brownies. But this is a real issue. This is something to slow down about. This is something to get serious about. Being that this week is National Eating Disorder Awareness Week, we are going to focus on the real issues at hand. 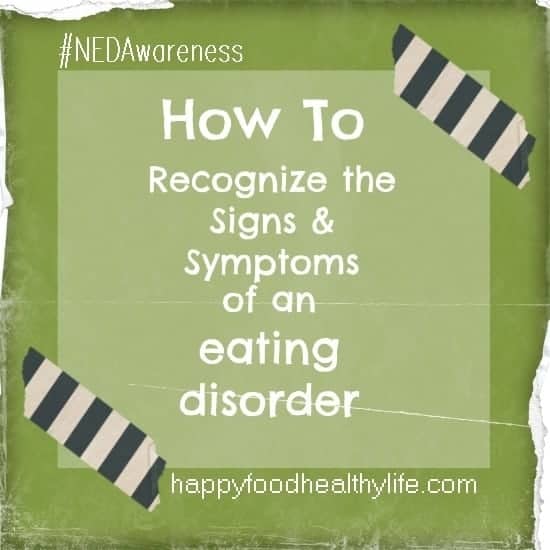 Or maybe you aren’t worried about someone else and their behaviors, but you’re worried about yourself and some of the unhealthy choices you are making. You may not know how serious your actions are. If you have any concerns at all with your eating habits, I urge you to take a look at the signs and symptoms I have listed here below:

* skipping meals
* making excuses for not eating
* eating only a few “safe” foods, which are usually low in fat and calories
* rigid meal or eating rituals, such as cutting food into tiny pieces or chewing and spitting out food
* having a passion for cooking bit meals and dessert but not actually partaking in them
* collecting recipes and obsessing over recipe books, food blogs, and “food porn”
* withdrawing from social activities
* obsessive worrying and complaining about being fat or overweight
* a distorted body image, such as complaining about being larger than he or she really is
* not wanting to eat in public or around anyone
* wearing baggy cothing
* use of laxatives, over-the-counter weight loss pills, or “magic” juices/drinks claiming to drop weight quickly
* food hoarding
* eating in secret
* excessive exercising
* self-induced vomiting
* low self-esteem
* going to the bathroom during or after meals
* eating to the point of discomfort or pain

As you can tell, some of these symptoms are serious and can  be life-threatening. This is not an exhaustive list of signs and symptoms of someone with disordered eating. But if you are concerned about someone or even of yourself, please do not hesitate to take action. Later this week, I will talk about the best ways to confront your loved one.

There is also a free and confidential screening on the National Eating Disorder Association (NEDA) website that will help you to determine if you need to speak with a professional and take the necessary steps to get healthy. You are 100% worth an amazing life that is not polluted with such a dangerous disorder. You have the power to make some major changes in your life.

“You have the ability to choose your path in life, and I urge you to choose the path of health and happiness.”